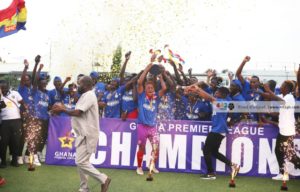 Hearts of Oak midfielder Frederick Ansah Botchway has urged teammates not to be complacent ahead of their participation in the CAF Champions League next season.

Botchway told Graphic Sports that Hearts would be the target of every home club for the next season; hence the need to improve their performance if they were to keep the Ghana Premier League title.

After their spectacular performance this season, Hearts fans expect their idol club to conquer Africa next season.

In a chat, the midfield enforcer revealed that he and his teammates were ready to make a name for themselves on the continental stage. Hence, they were ready to work harder.

“We don’t have to start the new season complacent because we will be the focus of every team in the country.

“If we have to successfully defend our championship title, we have to improve our game. I believe everyone is ready for it because we know the task ahead, ”he said.

“We know what’s ahead, especially in the Champions League, but I can tell you that everyone wants to make a name for themselves and that’s why we will keep working hard,” said Botchway.

The midfielder was a key figure in Hearts’ league success, with players like Emmanuel Nettey, Ibrahim Salifu and Isaac Mensah as his midfield partners.

Regarding the team’s mid-season transformation, Botchway praised coach Samuel Boadu for bringing the unit back to the team.

“We played well but missed opportunities and you know how inconsistent we were at the beginning of the season. But our new coach came and changed us all.

“The most important thing he did was bring us all together and that made the difference for the team,” he explained.