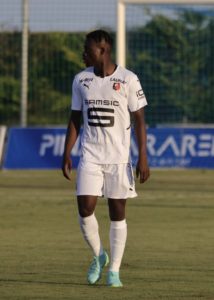 On Wednesday evening, Kamaldeen Sulemana, a Ghanaian youngster, made his Ligue 1 debut for Stade Rennais FC against CF Getafe from Spain.

Sulemana was introduced 20 minutes before the end of the game and his team were 2-1 behind the La Liga team.

Sulemana wasted no time getting into the game, drawing a foul from Dakonan on his first appearance, giving the Getafe player a yellow card for a tough foul on the former FC Nordsjaelland player.

Getafe scored goals in the first and second halves to beat Stade Rennais 2-1 and lost Kamaldeen Sulemana on his unofficial debut for the Red-Black national team.

The Right to Dream graduate only played 20 minutes of the game but wasted no time demonstrating his skill with quick movements when he had the ball.