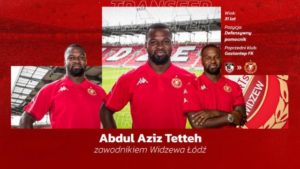 Polish club Widzew Łódź have signed up for The Ghanaian midfielder Abdul Aziz Tetteh in the current summer transfer window.

The 31-year-old has signed a one-year contract with the option of an extension for a further two years after completing the medicine.

Below is a statement from the association:

“Abdul Aziz Tetteh is the new player from Widzew Łódź.”

“The defensive midfielder has had a successful medical examination and has signed a one-year contract with Widzew Łódź with the option of an extension for a further two years.

“The 31-year-old is a native of the Liberty Professionals club and in the following years of his career played for the Italian Udinese Calcio, from whom he was loaned to Spanish teams: Xerez CD, Granada, CD Leganés and Montañeros.

“After leaving Udinese, Tetteh signed a contract with Greek AS Fokikos and then – AO Platanias. In Platanias, the Ghanaian was discovered by Polish scouts and went to Lech Poznań. The central midfielder is the Polish fans from his appearances in the capital of Wielkopolska , where he spent 2.5 years and together with Kolejorz won the Polish Supercup twice.

“Tetteh has played in the top league 65 times and he has also played in the Europa League, according to his record. The 31-year-old was transferred from Lech to Dinamo Moscow, where he played for a year and a half. Before the start of the 2019/2020 season, the Ghanaian decided to move to Turkey – to Gaziantep FK.

“It is worth noting that the midfielder has been noticed by the youth team coach during his career and has played five games for the Ghanaian U20 national team.

“Abdul Aziz Tetteh passed all medical tests on Thursday and signed a twelve-month contract with Widzew Łódź with an option to extend for a further two years.”