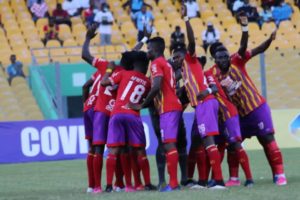 Defender Caleb Amankwah scored the Hearts of Oak’s victory over Elmina Sharks with a direct free kick on Sunday evening and reached the semi-finals of the MTN FA Cup.

The phobias played today as a guest of the team in Elmina in the quarter-finals of the 2020/2021 edition of the domestic cup competition.

Although both teams impress in 90 minutes, neither team could score and therefore had to go into extra time.

With Hearts of Oak taking the lead and finishing the game 1-0, the Phobians earned their ticket to the semi-finals of this year’s MTN FA Cup competition.

Today’s win is a major boost for the capital-based club, who aim to double that after winning the Ghanaian Premier League title earlier this month.