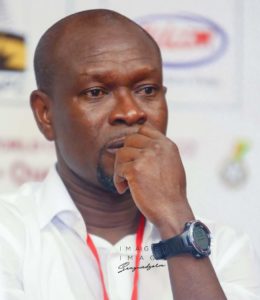 King Faisal’s bankroll, Alhaji Karim Grunsah, has pleaded with coach Charles Kwabla Akonnor to step down from his job with the Black Stars.

Akonnor, 46, has come under pressure after the Black Stars’ disastrous performance in the last two games of World Cup qualifying in 2022.

Ghana secured three out of six possible points against Ethiopia and South Africa, but delivered an uninspiring performance in the two games.

The last game against South Africa that the team lost at the FNB Stadium resulted in the coach coming under fire from the media and some fans.

According to Alhaji Grunsah, CK Akonnor is not fit for the job and has to resign immediately.

“CK Akonnor should respect himself and step down from his job rather than being laid off,” he said in Accra Happy FM.

Alhaji added that he still feels that CK Akonnor is not suitable for the Black Stars.

“GFA will not compromise with CK and vice versa. When we named CK Akonnor I said he can’t do the job but an expatriate trainer should be named, “he added.

The Black Stars are in 3rd place with three points and will continue their qualifiers next month with a double header against Zimbabwe.