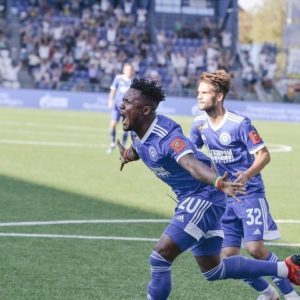 On Saturday evening attacker Joel Fameyeh met for FC Orenburg in the overwhelming away win against KamAZ in the Russian First National League.

On his return from international appearances for the Black Stars against Ethiopia and South Africa in qualifying for the 2022 FIFA World Cup in Qatar, the former Asokwa Deportivo SC striker scored his team’s third goal in a 4-0 win over KamAZ.

Nikolay Prudnikov scored the first goal of the game in the 24th minute and Arshak Koryan scored the 2-0 two minutes later to give the visitors a clear lead at halftime.

Fameyeh scored the third goal of the game to make it 3-0 seven minutes after half-time, but Arshak scored again for the visiting team to make it 4-0.

The 24-year-old has scored five goals and one assist in eight games for FC Orenburg in Russia this season.