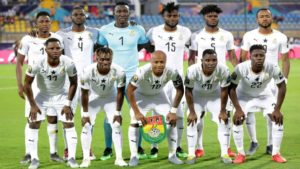 Former Ghana defender John Paintsil has asked for support for the senior team, the Black Stars.

The Black Stars dominated the local media for all the wrong reasons after their two 2022 FIFA World Cup qualifiers.

In the second game of Group G, the West African country suffered a 0-1 defeat against Bafana Bafana from South Africa at the FNB Stadium.

CK Akonnor, the team’s head coach, is uncertain after the two games played.

However, Paintsil, who made the Black Stars right-back position his real property during his playing time, claims the guys are going to be good soon.

He was Coach Appiah’s deputy before being appointed to coach the team.