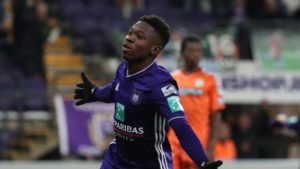 The Ghanaian international Francis Amuzu was on target on Sunday afternoon to help RSC Anderlecht overpower Mechelen with a 7-2 win in the Belgian Jupiler Pro League.

The attacker and his team entertained the opponent on the matchday today, who was keen to collect the maximum three points in order to catapult himself very high in the overall standings.

After an impressive performance in the first half, it was normal until half-time when a Nikola Storm goal was canceled by an equalizer from Benito Raman.

In the second half, Christian Kouame scored a brace to give RSC Anderlecht control of the game in the 49NS and 57NS Minute or