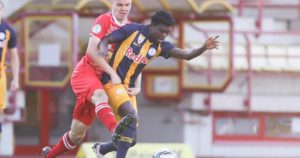 The Ghanaian international Forson Amankwah was a hit on Sunday when his team from Liefering Rapid Vienna defeated 6-2 in the Austrian sub-league.

The former WAFA SC man has been in top form since joining the club and is now a regular on the team.

In a game at the Red Bull Arena today, the exciting midfielder was named to the starting line-up of his team and led to success with a goal and a brilliant assist.

On match day Luka Reischl opened the goal for Liefering after 19 minutes of the first half.

Later in the second half, Forson Amankwa joined Nene Dorgeles to extend the lead for the hosts as they eventually drove to a strong 6-2 win.

For Rapid Vienna, Marko Dijakovic and Nicholas Wunsch scored the consolation goal for the team.