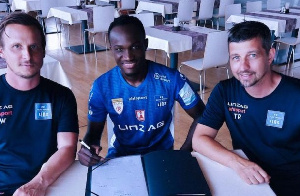 The 25-year-old, who moved to the Austrian lower division club in the summer transfer window that has just ended, has not yet played a competitive game for the club.

However, Stefan Reiter announced an update about striker Dwamena, who is currently not allowed to have physical contact, but is sure that he will soon be playing for the club.

“He’s totally fit, in very good shape. He’s not allowed to have any physical contact at the moment. I think we’ll see him soon.” He said.