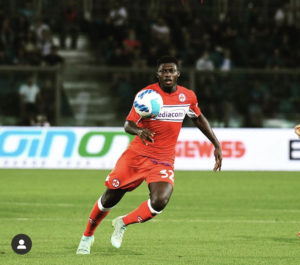 The midfielder was on duty for the club over the weekend when the team played as a guest on matchday to fight for the points available.

Although it was an uphill battle, Fiorentina emerged victorious largely thanks to the heroism of young striker Vlahovic, who scored a brace on match day.

Alfred Duncan shares his thoughts after the game and says it was great to secure the win to continue the team’s good run.

“Good game and great victory to continue our journey! Forza Viola, ”the midfielder posted on Instagram after the game.

Alfred Duncan was close to being loaned out, but no agreement was reached with any club.

He is now staying at the club this summer and is determined to do everything possible to help the team and also to push for a place in the starting XI.