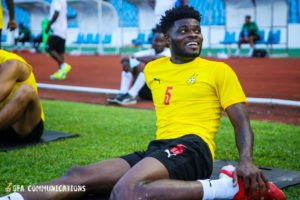 Ghana’s captain Andre Ayew believes the team has been strengthened with the return of Thomas Partey and Mohammed Kudus.

Partey, who plays for Arsenal, and Kudus, who plays for Ajax, both missed the Black Stars’ second game in Group G against South Africa, to be played at FNB Stadium, due to travel restrictions.

With a double header against Zimbabwe earlier this month, the pair are expected to feature in both games.

According to Andre, he’s pleased with the pair’s return ahead of the game scheduled for today.

“It is very important to have a full squad and for me they are back and fit from the injury is a blessing and they have a chance to play.

“So, to have Partey and Kudus back, I’m really excited and hope that everyone else can come back and join us to play the game,” he added.

The Black Stars are in second place with three points after playing two games.