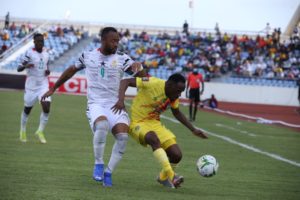 The Black Stars host the Warriors today at Cape Coast Stadium in a Group G match of Africa qualifying for the 2022 FIFA World Cup.

After training with his Black Stars players for the past four days, coach Milovan Rajevac has studied his players and is ready to lead the team to victory against Zimbabwe today.

For Ghana’s starting XI, the newcomer Jojo Wollacott is at the start and will work with a defensive back four.

Midfielder Thomas Partey plays a huge role in midfield while Kamaldeen Sulemana and Mohammed Kudus are selected to attack Ghana.

Below is the starting XI for Ghana, who face Zimbabwe tonight:

Did you get your line-up spot? #BringBackTheLove | #Black stars | # WCQ2022 pic.twitter.com/immeRtDy22

Check out the Zimbabwe team for the Ghana encounter attached below.

Before tonight’s encounter, South Africa beat Ethiopia 3-1 in the other game of the third day of Group G. The result increases the pressure on Ghana.

The Black Stars must win convincingly to keep hopes of qualifying for the 2022 FIFA World Cup alive.

1 “We’re at the Cape Coast Stadium as Ghana is starting us in the crucial qualifying game for the 2022 FIFA World Cup against Zimbabwe.

3 ‘First test for Joseph Wallocot in the post, but he comes with flying colors. Great goalkeeper.

5 ‘goal !! It is a destination for Ghana. Mohammed Kudus plays a 1-2 with striker Jordan Ayew before finishing in style. The Black Stars lead after five minutes.

7 ‘All cheers at Cape Coast Stadium as the fans sing and dance after this breathtaking Mohammed Kudu goal. Can Zimbabwe get back in here?

8 ‘Injury shock for Ghana. Talented teenager Abdul Fatawu Issahaku is in pain. Fortunately, he can go on. Game restarted.

10 ‘Andre Ayew commits an offense after losing possession. It will be a kick for Zimbabwe.

12 ‘Jordan Ayew tries to use his body but exerts too much energy. In the end, he admits a foul.

14 ‘It’s fair to say the game has dragged on since that opening goal. Ghana is no longer signing men forward, while Zimbabwe is also reluctant to push forward.

17 ‘Zimbabwe have better possession for the last five minutes but can they do it?

19 ‘Baba Rahman with a brilliant run to give Mohammed Kudu a chance. The striker shoots from close range, but his shot goes straight into the waiting arms of the Zimbabwean goalkeeper.

21 ‘Abdul Fatawu Issahku passes two defenders and tries to fire a shot, but unfortunately slips. Great stuff from the best African Under-20 player.

24 ‘CLOSE !!! Kamaldeen Sulemana almost scores with massive efforts. His attempt has been deflected and therefore Ghana will get a corner.

30 ‘Mohammed Kudus has been shown the yellow card for an obvious waste of time.

32 ‘A bit of entertainment for the fans. Mohammed Kudus skips his marker, dummies, and spins to unbalance his marker before winning a free kick. Great game from the young fellow.

36 ‘Ghana are pushing for the second goal, but so far the visitors’ defense has refused to concede again.

40 ‘We have five minutes of regular time in the first half.

41 ‘Oh great game. Joseph Wallacot shows that he can play under pressure there.

42 ‘Goal !! No waiting. The goal will not stand. Kamaldeen Sulemana has scored but is offside.

Halftime: That’s all the action in the first half. The footballghana.com team will be back with updates on the second half in 15 minutes.

46 ‘The second half of the game is underway.

47 ‘Zimbabwe has been awarded a penalty. What a start for the Warriors.

48 ‘GOAL !!! Knowledge Musona hits right away to compensate for Zimbabwe. Continue to play.

50 ‘We now have a game in hand. Zimbabwe is now playing with a lot of confidence after his goal.

54 ‘Ghana are now setting the pace of the game. Can the home team secure the victory they need? It’s hard to tell right now.

59 Ghana wastes a corner. Now there is a chance of a substitution. The teenager Fatawu Issahku makes way for Baba Iddrisu. Jordan Ayew will also be replaced by Benjamin Tetteh.

60 ‘LUCK !! Substitute Benjamin Tetteh is set on goal by Baba Rahman. Unfortunately, his short sails over the bar.

63 ‘Ghana goalkeeper Joseph Wollacot saves a good save to prevent Zimbabwe from scoring a second goal.

68 ‘Ghana with a free kick in the Zimbabwe area. Kamaldeen Sulemana scores, but Djiku’s header sails over the crossbar.

72 ‘After that second goal it was all Ghana. Substitute Benjamin Tetteh prepares Mohammed Kudus, whose shot is safely saved by the opposing goalkeeper. It could easily have been a gate there.

75 ‘Kamaldeen Sulemana uses his dribbling skills very well there to get past his marker at a tight angle. he’s trying to find a teammate but Zimbabwe is cleaning up their lines.

78 ‘CHANGE: Kamaldeen Sulemana makes way for Daniel-Kofi Kyereh. The teenager stood out this afternoon and receives cheers from the crowd.

80 ‘We are in the last 10 minutes of today’s meeting. Will there be another goal?

87 ‘GOAL !!! Andre Ayew scores with a powerful header to extend the lead for Ghana. Now it’s 3-1 against Zimbabwe.

Full-time: Ghana get all three points at Cape Coast Stadium. Thank you for joining this live comment feed.