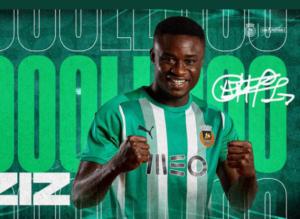 Ghanaian striker Abdul-Aziz Yakubu scored a win for his Rio Ave team on Sunday morning when the team faced UD Vilafranquense in the Portuguese Secunda Liga.

The attacker has been in great shape since the Portuguese minor league began in 2021/2022.

Today he was called up to lead the ranks for Rio Ave as the team hosted their matchday opponent.

In the game against UD Vilafranquense, the guests took the lead after 37 minutes when Mouhamed Belkheir equalized.

Rio Ave stayed behind, fought back and equaled with a fine shot from Hugo Gomes in the 59NS Minute.

Later in the second half, Ghana’s Abdul-Aziz Yakubu decided the game when he scored with a fantastic shot in the 83rd minute.

The young striker’s goal sealed a glorious 2-1 comeback win for his side as they push for promotion to the top of the Portuguese Secunda Liga.