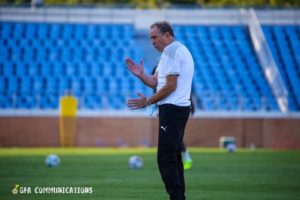 Ghana national team head coach Milovan Rajevac has admitted that the Black Stars were lucky at a few moments in the game against Zimbabwe.

The Black Stars hosted the Warriors on Sunday at Cape Coast Stadium in a Group G game of African qualifying.

On match day Ghana won 3-1 at the end of the competition, but had to fight back in the second half.

At his post-game press conference, Black Stars coach Milovan Rajevac said he was delighted with his team’s good game.

“All in all, it was a good game after our result. We started the game well but we had some problems later in the game, especially in the second half and we conceded a goal, but I managed to identify some of the problems and make the right substitutions so we came back and we won, “said the Serbian tactician called.

However, manager Rajevac notes that Ghana got lucky in some parts of the game.

“We were lucky a few moments in the game but the most important thing for us is that we got three points and our hard work paid off,” he added.