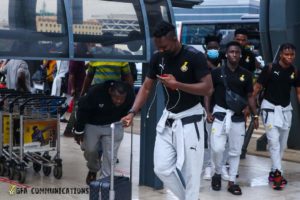 The senior national team, the Black Stars of Ghana, have arrived safely in Harare for the second leg of the 2022 FIFA World Cup qualifying.

Ghana returned to winning ways on Saturday with a 3-1 win over Zimbabwe at Cape Coast Stadium in the day’s three games.

Mohammed Kudus, Thomas Parety and Andre Ayew scored for the Black Stars to keep the country’s chances of qualification.

Ghana are hoping to continue their good start under new coach Milovan Rajevac in the second leg against the Warriors in their own backyard.

The Black Stars, led by Milovan Rajevac, left the coast of the country early in the morning on Sunday and arrived safely in Harare for the game scheduled for Tuesday.

The team was accompanied by Kurt Okraku, President of Ghana Football [GFA] along with board members of the Black Stars.

The team will train today before Tuesday’s game.

After an impressive win, Ghana are only one point behind South Africa after three rounds of play.

The Black Stars are trying to return to the global showcase after missing the last 2018 edition in Russia.