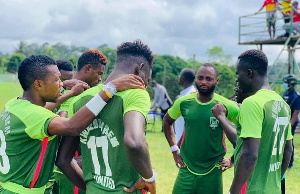 As winners of the 2020/21 Division Two League of the Eastern Region Football Association (ERFA), Kwaebibirem United has secured qualification for the Division One League.

The Asuom club beat the Great Warriors 2-0 at Akim Oda Park on Saturday to book the qualification.

To win the Division Two League, Kwaebibirem United will take part in the upcoming Division One League season, which starts this November.

Kwaebibirem United, looking to make a difference in the second division, are expected to add to their squad before the start of the Division One League season.

Former Asante Kotoko and Hearts of Oak right-back Christopher Bonney is likely to appear for the club next season.