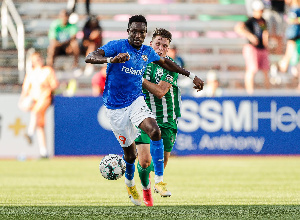 The former Asante Kotoko shooter has been in great shape since joining the USL club in America earlier this year.

The 28-year-old opened the goal for the guests after only five minutes of play with a knock from close range after a defensive howl.

The highly anticipated game, however, ended in a 1-1 draw when Chris Wehan restored parity for the hosts in the 24th minute.

The enterprising player has appeared 19 times for his team in the USL Championship this season, scoring 11 times and providing an assist.