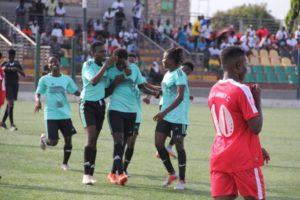 The Women’s Division One Regional Zonal Championship began on Friday, October 8, 2021 in the northern zone at the Aliu Mahama Stadium in Tamale.

The Fosu Royals, the winners of the Brong Ahafo Regional Division One League, got us rolling when they played against Upper West Region Representative, Real Crusaders Ladies.

The game seemed easy for Brong Ahafo’s side as they beat their opponents 10-1.

Mabel Amoyaw was the day’s top scorer when she left Salimu Imoro five minutes behind.

The goalkeeper had a hectic day at the post, Sandra Ankomah also scored a brace. Yazdadatu Suleiman scored the consolation goal for her team in the 83rd minute.

The second game of the day also had a cricket score as Savannah FC beat the Dynamites Ladies by eleven to one goals.

The winners of the northern region seemed too strong for the runners-up in the Ashanti region.

Karima Abdullai scored five, Abdul Hanan Salina scored four and Mary Averu scored a brace. It was a busy day for Barichisu Azaare between the sticks when she cashed eleven. Doreen Sarfowaa scored the consolation for the Dynamites Ladies.

At a feast of goals at the Aliu Mahama Stadium, the last game of the day was played between Dreamz Ladies and Zicom Ladies, in which only 5 goals were scored.

Dreamz Ladies started stronger and broke the deadlock in the 10th minute and Charlotte Sarpong added a second, but Zicom Ladies responded with a retreat in the 17th minute. Dreamz won the game by 4 to 1 goals

The first game of the day was between Essiam Socrates and the Greater Accra Regional Champions, Faith Ladies.

Essiam Socrates had a tough job in this match and Faith ladies turned out to be stronger than they carried with them through the day. 3-0 victory.

Jennifer Kankam scored a brace as Alexander Ama also had her name on the match report sheet.

In the second game of the day, the Army Ladies faced the Basake Royal Ladies. Army Ladies entered this competition after losing the Greater Accra Regional Championship final and trying to prove a point to make it into the next season of the WPL.

The midfield sensation, Zinat Alhassan, scored a nice free kick and gave the Army women the lead 16 minutes into the game.

Elizabeth Adoma deepened the problems of the Basake Royal women when she scored a brace to make it 3-0. Cynthia Okine and Nancy Opoku made sure their names are on the Scoresheet and that made it 5 for Army Ladies.

Sarah Armah scored a nice solo engine in the 46th minute as a consolation for the Basake Royals.

Anlo Ladies welcomes Valued Girls in the last game of the day. Anlo Ladies wanted to represent the Volta region with luck, but the undefeated champions of the Eastern region were too strong for them. Nusimebia Kudzo scored the first goal of the game for Anlo Ladies in the 7th minute, but that didn’t last when Dorcas Manu and Regina Agbalati each put a brace four behind Avugbe Mawunyo.

The competitions should continue this week.

The top two teams in each post-competition zone will advance to next season’s Women’s Elite League.