The Philippine women’s national team came out on top with a dramatic 2-1 comeback win over Nepal last Saturday, March 18th.

Just a few minutes behind in regular time, Tahnai Annis and Camille Wilson scored in the 90.

Despite the win, the Philippines had to endure almost 80 minutes one goal behind after Bimala Chaudhary in 10th place.

Nepal’s gate could not dampen the Philippines as they pushed on the gate. Annis was close in the following minutes but couldn’t touch the ball.

The Philippines held their resolve in search of the equalizer until injury time, and found it when the clock hit the 90th minute. Debutant Chandler McDaniel snatched an inviting cross from the right flank and found the onrushing Annis in the box, which she sent into the net to give the Philippines a deserved lifeline.

With time remaining, the Philippines went in search of a winner. Camille Rodriguez sent a cross for McDaniel, who had enough contact with her to send her to Wilson’s patch to pounce on the winner.

Head coach Marlon Maro was delighted with the win, which brings the country one step closer to qualifying.

“The new players played well and started the first goal,” said Maro. “Our adjustments in the second half meant that we scored in the last five minutes.”

The Philippines next meet on Friday, Nov. 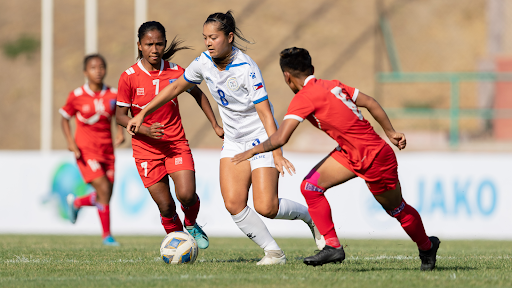