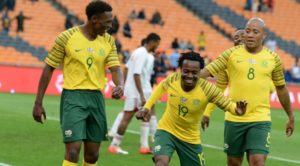 South Africa hopes to complete the double against Ethiopia in the current qualifiers for the 2022 FIFA World Cup on Tuesday.

Bafana Bafana beat the same opponent 3-1 in Bahir Dar on Saturday and improved to seven points after three games, one point ahead of Ghana, who defeated Zimbabwe with the same result.

A win against the same opponent increases their chances of qualifying for the next round of World Cup qualifiers.

“It was a very difficult game on a very tough pitch. I told the players before the game that we don’t need a trophy of the best football, we need the title of the team with the most character,” said Bafana Bafana head coach Hugo Broos Follow-up.

“We showed that character, we fought for every ball and we won, and it’s a great win.”

In the head-to-head statistics, the two nations have faced each other on three previous occasions with Bafana Bafana’s first weekend win in this rivalry.