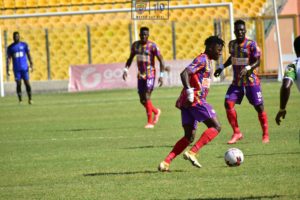 Former Hearts of Oak star Ruben Senyo has predicted that the club will annex the CAF Champions League title in 2021/22 if he can beat his Moroccan counterpart Wydad Athletic Club.

Hearts of Oak last played in the group stage of the CAF Champions League in 2006 and will hope to move into the money zone.

In an interview with Aben FM’s Sylvester Ntim, the former Viva Kerala striker said, “If Hearts of Oak is able to eliminate WAC it means they will win the Champions League title, I know what I’m saying . “

Meanwhile, Ruben Senyo has warned the rainbow boys to watch out for their Moroccan colleagues.

“So I’ll advise Hearts of Oak to take advantage of the first leg in Accra and score more goals before the second leg. They shouldn’t score less than 2 and I think with a 2-0 or 3-0 at home the club can advance to the group stage.

“Hearts should win convincingly at home to increase their chances of qualifying. You should also steer against goals conceded and that way the team can go into the money zone, ”he said.

Hearts of Oak will host the WAC on Sunday at the Accra Sports Stadium before the second leg takes place in Casablanca on October 24th.

Senyo was a huge fan favorite during his stint with the Phobians, winning two Premier League titles before moving to Indian to join Viva Kerala.