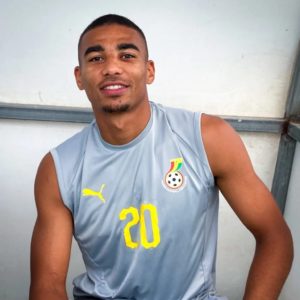 Ghana’s defender Alexander Djiku expressed his enthusiasm after helping the national team win a decisive double against Zimbabwe in qualifying for the 2022 FIFA World Cup.

Racing Strasbourg’s center-back was on duty for the Black Stars last Friday when the West African nation’s national team beat the Warriors 3-1 in Cape Coast.

In the second duel of the double headed game on Tuesday afternoon Djiku played again for Ghana in defense and helped the team to the 1-0 victory of the opponent at the end of the fight.

Alexander Djiku went to his Twitter page to respond to the two victories and said: “Ghana is the reason to be happy”.

He added: “Proud of the team and thank you to our fans for their strength.”

Unfortunately, Alexander Djiku will miss Ghana’s next game in the 2022 World Cup qualification against Ethiopia during the next international break due to a suspension.