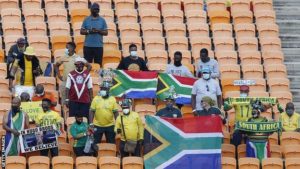 One of the best known supporters of Bafana Bafana Sadaam Maake – a self-proclaimed “football slave” – ​​is a familiar face in football stadiums across South Africa.

For the first time in 18 months he was back in the stands on Tuesday when the country’s national team met Ethiopia in a World Cup qualifier at the FNB Stadium.

Maake was among a small number who got to watch the Soweto clash as part of a pilot event for fans returning to sporting events following restrictions during the coronavirus pandemic.

“I feel like we have finally been released from prison,” Maake, who wore his oversized yellow sunglasses and carried a counterfeit World Cup trophy, told BBC Sport Africa.

“We can finally show our love and support in person. It’s long overdue.”

The FNB Stadium, also known as The Calabash and renamed Soccer City during the 2010 World Cup, has a capacity of 94,000, but the game against Ethiopia only allowed 2,000 vaccinated spectators.

Those lucky enough to get tickets were put through rigorous temperature and vaccination ID checks before they were allowed to occupy their seats before kick-off.

Last month, the President of the South African Football Association (Safa), Danny Jordaan, announced that free tickets would be available to fans attending the game – provided they can prove a vaccination against Covid-19.

All tickets were purchased within two hours of being released on Monday afternoon. The decision by Safa and the government to only see a small number of viewers disappointed many.

Jordaan said the pilot was a “huge success” but the challenge is to get more people into the stadium.

“We are negotiating with the government to get more fans for the next game against Zimbabwe next month,” he added.

Despite Jordaan’s comments, some fans were disappointed when they arrived at the stadium hoping to see the game.

“I showed the security guards that I was fully vaccinated, but I was not allowed to enter the stadium,” said Gezhahn Yetay, a supporter of the Walias. “I am very disappointed.”

Ethiopia Lost 1-0 to South Africa and visiting fans believe it’s because they weren’t let in.

The South African government has stepped up efforts to promote the introduction of vaccinations in the country to encourage the large number of people who are still reluctant to take the vaccination.

Football fans are considered a perfect target as they complain that they are not allowed to support their teams by attending real matches.

The game between South Africa and Ethiopia will serve as a benchmark to dictate how sporting and entertainment events will be conducted in the future as social distancing continues to be an issue.

It is hoped that more people will be able to attend events of their choice in the near future.