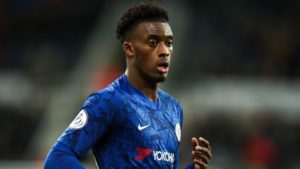 Dortmund had given Hudson-Odoi the opportunity to play in his preferred position on the left, but Chelsea directly turned down the offer.

Tuchel, the Blues manager, said the club couldn’t let the 20-year-old go as the young English star’s ability to play as a full-back was crucial.

Hudson-Odoi made his 100th appearance at Chelsea in Saturday’s 3-0 Premier League win against Aston Villa.

“It was a very easy decision for me, we can’t let go of the player who is in an 18- or 19-man squad. Simply impossible, ”explained Tuchel.

“He can play as a right full-back, as a left full-back, he can play in these additional positions, he knows the group and we know him very well.”

“It might have been a very good opportunity for him personally, but it was just impossible for us.”

Tuchel values ​​Hudson-Odoi’s ability to play in other roles, but the Chelsea manager is aware that the gifted winger longs for a chance in a more advanced role.

Chelsea’s German coach praised Odoi’s level before challenging the Wandsworth-born star to reproduce it in every game.

“I see a stronger, stronger Callum every day in training, I overcome the gap between training and the game,” said Tuchel.

“And now he has to show that in games. If he gets minutes, it’s never a gift. Nobody gets presents “,

“I know it’s not his favorite position but I think he can play that position and serve the team very well.”

“But he can always do better, he can still be more aggressive and he does that in training.”

“He has to bridge that gap between training and play to fight for his place on this team.” he ended