The highly anticipated Division One League Super Cup will begin on Wednesday, October 13, 2021 at Madina AstroTurf in Accra.

There will be an opening ceremony on Wednesday before Zone Two winners Bibiani Gold Stars take on Skyy FC in the tournament’s opening game at 9am. The other Group A game will take place at 15:00 between Tano Bofoakwa and Tema Youth SC.

In Group B, Accra Lions meet Samartex in 1996, while RTU meet Berekum Arsenals on Matchday 1.

The group stage of the tournament ends on Monday, October 18, while the semi-finals will be played on Wednesday, October 20, 2021.

The final of the Division One League Super Cup will be played on Saturday, October 23, 2021. 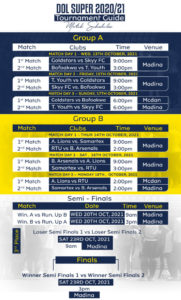